What is Aperture in Photography? Key Concepts Explained

Struggling to understand aperture and how to use it effectively in your photography? Here are some key concepts and simple explanations to help clear up any confusion.

One key concept in photography that a lot of beginner photographers struggle with is aperture.  And for good reason – the numbers that indicate aperture on our cameras don’t make a whole lot of sense at first, and it is tempting to just ignore it and stick with Auto Mode.

Below I help you break down the mental barriers around aperture so that you can start using this powerful tool to unlock your creative potential today.

What is Aperture in Photography?

Aperture is one of the three camera settings that control the exposure of an image.  Collectively, these settings are referred to as the “exposure triangle” and consist of shutter speed, aperture, and ISO.

Aperture controls exposure by increasing or decreasing the relative amount of light that enters a camera lens.

This seems straightforward enough, however, the details of how aperture works to control exposure is often a stumbling point for many photographers.

Let’s break it down.

Every camera lens has an internal circular diaphragm of overlapping blades with an opening at the center.  If we were to take a lens apart and look at this diaphragm, we would see an opening in the middle called the “aperture”.

The diameter of the aperture changes as the diaphragm blades are adjusted, and this controls how much light passes through the lens to the camera sensor.

There is a small detail that is often missed about this opening.  Because there is a lot of lens glass in front of and behind the diaphragm, the hole that you see when you look at the end of your lens is actually called the “entrance pupil”.  On the camera mount side of the lens, it’s called the “exit pupil”.

More on that later.

How Does Aperture Work?

To understand how aperture works as part of the exposure triangle, we first need to grasp a key concept.  We’re going to talk a little bit about how light behaves, so bear with me.

Wavelengths of light entering a camera lens through the aperture travel along the distance of the lens barrel to get to the camera sensor.

That distance is important in understanding aperture and is known as the “lens focal length”.  Most lenses are identified by their focal length (a 35mm lens, 50mm lens, 70-200mm lens, etc.).

Physics tells us that the intensity of light diminishes as it travels over a distance.  This inverse relationship between light intensity and distance is known as the Inverse Square Law.

However, we don’t need math to understand the Inverse Square Law conceptually.

Imagine sitting around a campfire with friends talking about your next photography adventure.  You can see everyone’s faces in the firelight. But, if you walk away from the campfire to gaze up at the stars, the intensity of the light from the fire will be reduced the farther you walk away from it.

The same is true in photography.

Let’s say we have a 50mm lens and a 100mm lens both set to have the same diameter of the aperture (really, the entrance pupil).  The same amount of light would pass through this opening in both lenses, but the light would have to travel twice as far in the 100mm lens to reach the sensor.

In this example, the intensity of light hitting the sensor in the 100mm lens would be less than that of the 50mm lens.

Now understanding this relationship between light and distance, we realize that simply controlling the diameter of the entrance pupil isn’t the complete picture (pun intended) in regard to exposure.

When it comes to controlling exposure, we need to also account for the focal length of the lens.

So, how do we do that? Enter the f-number!

How Aperture Accounts for Focal Length

Aperture settings are represented by an f-number (also referred to as the f-stop).  The f-number is a dimensionless, relative unit that considers both the lens focal length and the diameter of the entrance pupil.  Some photographers call the aperture the “relative aperture” for this reason.

To account for this relationship, the f-number is represented as a ratio (or fraction) of the lens focal length divided by the diameter of the entrance pupil:

Let’s look at an example of relative aperture and f-stops:

Because the f-number is a ratio that is dependent on focal length, the aperture setting is a normalized value and indicates the same amount of light exposing the sensor regardless of the lens.

In this way, all apertures are created equal when it comes to the amount of light traveling through a given lens.  An aperture of f/4 on one lens will allow the same amount of light to hit the sensor as f/4 on a lens of a different focal length even though the diameters of the entrance pupils are different.

What is the Maximum Aperture of a Lens?

The reason camera manufacturers produce variable aperture lenses in addition to fixed variable lenses is that they tend to be lighter and more economical.

The downside of using a variable aperture lens is that the longest focal length will have a smaller maximum aperture. This affects depth of field, how well the lens performs in low light, and how fast the lens is at that focal length.

How Do Teleconverters Affect the Maximum Aperture?

Teleconverters are used to extend the focal length of a lens.  They attach between the camera mount and the lens, and some are compatible with a camera’s autofocus system (it is worth checking on this to be sure).

Teleconverters are a lightweight and economical way to get more reach with your lenses.

For example, a 2x teleconverter on a 200mm lens would make the effective focal length of that lens 400mm.  When I want to pack lightly, say for a day hike with my camera, I’ll often opt to bring a teleconverter rather than lug around a heavy telephoto lens.

What Are the Downsides of Using a Teleconverter?

Because teleconverters reduce the maximum aperture of a lens, less light will hit the sensor when the lens is at its widest aperture.  This affects how well the lens and teleconverter combination will work in low light situations.

To account for the reduction in light, you would have to either use slower shutter speeds or increase the ISO (or both) to get proper exposure.  These changes aren’t always feasible and could reduce the quality of the image.

Secondly, as I mentioned earlier, some teleconverters don’t work with the camera’s autofocus system, which will essentially turn your lens into a manual focus lens when using the teleconverter.

What Aperture is the Sharpest?

Is there an aperture at which a given lens will yield the sharpest image?

Generally, yes.  Several factors influence how to get sharp images (a topic for another article), including aperture.

However, there isn’t one universal aperture that is considered the sharpest because sharpness depends on the optical design of the lens, so the best aperture will vary depending on the lens.

Lenses tend to operate best somewhere in the middle of their f-stop range, usually a few stops down from the maximum aperture (say around f/5.6 – f/8 on an f/2.8 lens), and that is considered its “sweet spot”.  The sweet spot is the f-stop (or f-stops) at which chromatic aberrations and lens diffraction are reduced the most.

You can find your lens’ sweet spot using the following method:

Alternatively, you could also check out DxOMark’s lens database to see if your lens has been tested by them.  They do extensive testing of lenses, including testing the sharpness at all of the apertures and focal length combination.

How Does Aperture Affect Depth of Field?

Depth of field (DOF) is defined as the region of an image that is acceptably sharp.  This region is the zone between two points that are at two different distances from the camera where all objects between those points are acceptably sharp.  DOF can be difficult to understand at first because an image is a two-dimensional object, and depth of field is a three-dimensional concept.

DOF is used as a creative technique to either blur the background of an image, such as in portrait photography, or to have most of the scene from foreground to background acceptably sharp, as in landscape photography.

When used to separate the subject from the foreground or background, the depth of field is said to be “shallow”, “short” or “narrow”.

When used to get as much of the scene as possible acceptably sharp, the depth of field is said to be “deep”, “long”, or “wide”.

How Does Aperture Affect Shutter Speed?

As mentioned in the beginning, aperture, shutter speed, and ISO compromise the three camera settings that control exposure.

If you are shooting in manual mode, then any change to one of these settings will require the change of one or more of the other two settings in order to maintain the same exposure.

As such, lenses with a low maximum aperture (typically f/2.8 or lower) are called “fast lenses” because they permit the use of fast shutter speeds and are capable of freezing motion in low light settings.

I hope this helped clear up any confusion you’ve had about aperture!  If you are still confused, feel free to leave a question in the comments below.

Which Aperture Should I Use For Outdoor Photography?

Are you wondering which aperture is best for different types of outdoor photography? Here are some guidelines. 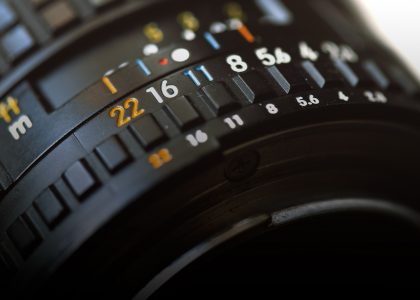 Ever wonder why aperture is measured in f-stops, why it is called f-stop in the first place, and why the … 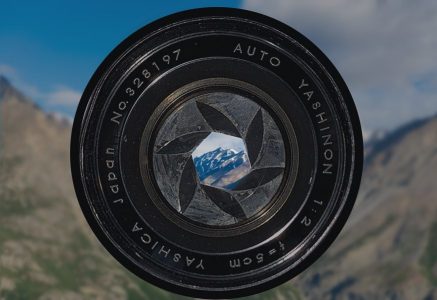 What is Aperture in Photography? Key Concepts Explained

Struggling to understand aperture and how to use it effectively in your photography? Here are some key concepts and simple … 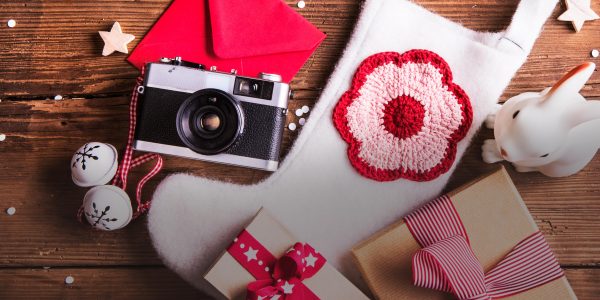 25 Stocking Stuffers Under $50 for Outdoor Photographers

Need affordable gift ideas for the outdoor photographer on your list? Look no further. 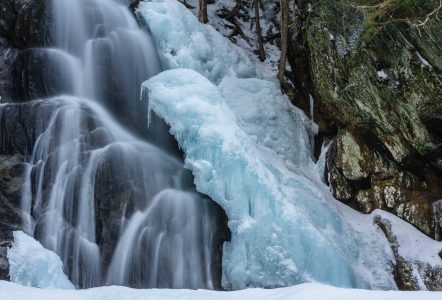 How to Photograph in Cold Weather and Stay Warm

Do you love to photograph winter scenes but hate freezing your buns off in the process? Learn how to stay … 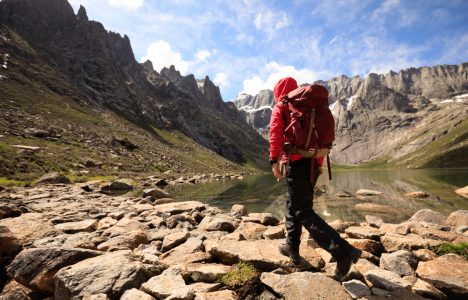 Hiking With Camera Gear: How To Protect Your Knees

Would you hit the trail with your camera more often if it wasn’t for your knee pain? I know I …

Want the inside scoop?

Join the OPS community of photographers and outdoor enthusiasts!

We will never spam you.  Unsubscribe at any time.